There are two basic types of the roulette casino game. These are European and American roulette. The main difference between the two types is in the number of the color slots or pockets on the roulette wheel. European roulette wheel has 37 pockets with numbers from 1 to 36 and a single zero, while the American variant of the game has an extra double zero ('00') on the wheel and the table layout.

A brief introduction on European Roulette

European roulette is undoubtedly among the most popular wheel games played in casinos across the globe, both at land-based and online casinos. A game of a chance where you lose or earn, depending on how good your guessing game is. Although, it is believed some people have mastered wheel strategies, which enables them to make right or near right guesses.  Some people play for fun, some play strictly to make money.

Roulette wheels have been in existence for a very long time, whereas the modern-day wheels have been found to be much more improved. It still operates and functions on the same set of rules as there were, in the 1800s.

Of all the various types of roulettes available in casinos, this particular type of roulette seems to be the number one choice for most players. Its popularity of the roulette is attributed to the fact that it affords players a higher opportunity to earn, with the house edge standing at a meager 2.7 percent.

The European roulette table and how it works

It features 37 different numbers, arranged from zero to thirty-six (36) on which each player puts his money on (unlike the American roulette wheel which contains 38 designs). It is made of two colors, as the numbers are alternately zoned into black and red pockets, although the zero is marked green. The numbers are divided into 4 groups of nines;

The goal that every player pursues just like in every roulette, is to successfully predict which of the numbered pockets, the rolling ball is going to settle into. To do that, all players participating make bets on different numbers of their choosing, which by the way give varying odds (depending on the type of bet), the wheel is then turned by the dealer, and he spins the ball in the opposite direction to roam around free. It takes a while to play out; a period of suspense and anxiety follows, with all players hoping the ball lands in the pocket they have placed bets on. Once the ball settles into a pocket, the player who had placed a bet on the pocket wins, and gets his payouts.

It is indeed a game of chance. 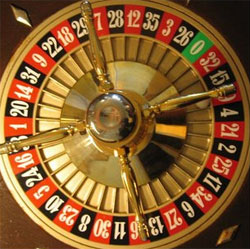 The European roulette wheel is basically not different from that in the American variant except that, as was mentioned above, it has only one zero. All in all, the European wheel has 37 colored pockets representing 36 numbers plus zero. Black and red colored pockets change each other on the wheel, and a single zero is situated in a green pocket. At a first glance it may seem that the numbers on the European roulette wheel are situated at random. In fact, there is an order that arranges the numbers on the wheel in certain combinations:

The layout is divided into two sections according to the two types of bets - inside and outside.

Some casinos with European roulette casino game offer advantageous rules - En Prison and La Partage. In the first case, if zero is the outcome of the spin, the players who have made outside bets may postpone their bets for the next game. In the second case, the player loses only half his bet without an opportunity to 'lock' his or her bet for the next game. These rules make profit of the casino even less - only 1.35%.