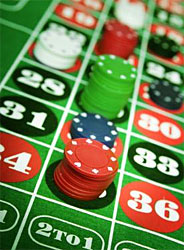 The Fibonacci sequence was introduced in the 13th century in Italy by a famous mathematician Leonardo Pisan, also known as Fibonacci. This is a mathematical sequence of numbers that relates to all spheres of nature. The sequence looks like this: 1-1-2-3-5-8-13-â€¦ and continues in positive progression. Every following number in the sequence is a sum of two previous numbers, like 1 plus 1 is 2, 1 plus 2 is 3 and 2 plus 3 is 5, etc.

In the roulette casino game, Fibonacci sequence offers a betting system that is in general less money-losing than the Martingale, but at the same time it is requires more time from the player. The sizes of bets here don't grow as dramatically, but still the system will require more spins of the wheel to finish the sequence.

Just like in the Martingale system, the player cannot play endlessly. He or she may exceed either the betting limit of the casino or his or her own bankroll. It is recommended to start playing with low bets, because the following bets may still increase quite fast.

The advantage of using the Fibonacci sequence in the roulette compared to the Martingale system is that the bets still remain lower as they aren't doubled. Still, it is important to limit the sequence duration to 6 or 7 subsequent losses in order to save your bankroll.