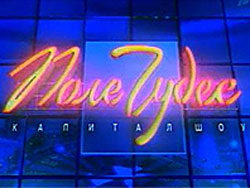 Sectors of the wheel

The player may choose to solve the puzzle even before spinning the wheel. If the answer is correct, the player gets highest points for each un-revealed letters in the puzzle. It is also important that the word is pronounced correctly.

In case the player names three letters correctly in one attempt, he or she may win additional cash. This option reminds of "progressive jackpot" in Royale Roulette game. To get the cash, the player is supposed to choose between one of the two boxes. One is empty, the other one contains cash.

The end of the game

The players who didn't solve the puzzle (or chose to take the prize) leave the game at the end of each round. Winners of the three game rounds play in the final round. The rules are the same. The winner actually wins the whole show. The credits received by the player during the game are used to buy prizes.